Chapter 1 – The evolution of Thrash Metal

The development of a new culture

The 80s: The Ruhrpott is the largest metropolitan area in Germany. One city follows the next. Collieries and mining facilities can be found everywhere. In a lot of areas, the air is polluted. Children play with other children in the street corners of old apartment buildings. In the evening, the father returns back home from a long working day. The meal, prepared by the wife, is already placed on the table. After having dinner together, they go to bed. Tomorrow, the school starts early in the morning and the day after Aunt Helga has invited to her birthday party in her allotment garden.

A week later, 4 young people – including Jürgen Reil – made the decision to found the school band Tyrant in Essen. A few kilometers east of it, a certain Tom Angelripper decides to start the band Sodom with two colleagues.

A few hundred kilometers south-east on the Main, a few young people – including Gerre – meet at the same time as the first band rehearsal of the Frankfurt band Vortex in a boiler room below St. Matthew’s Church.

Further up the Rhine to the south, a few young people including Schmier meet under the banner of the band Knight of Demon in Weil am Rhein.

The focus of the four bands is drinking beer and being together – they wanted to escape from everyday life and celebrate and listen to their musical heroes. At that time bands like Venom, Judas Priest and Kiss belonged to them. How exactly make music making by themselves was secondary at beginning. Instruments are bought with the confirmation money and it often takes some time to find a rehearsal room where the neighbors don’t complain every day so that one or the other party can be celebrated.

While cassettes with the current music are being exchanged all over Germany, metal clubs are emerging at the same time to unite the passion of young people. So the first frocks were made and concerts were visited together. Legendary parties such as those in Birkental or on the heath in Oberhausen arose. The scene was alive and they met each other. The music became harder and faster.

In Chapter 1 of Total Thrash we inform about development of Thrash Metal in Germany up to its peak in the late 80s / early 90s. 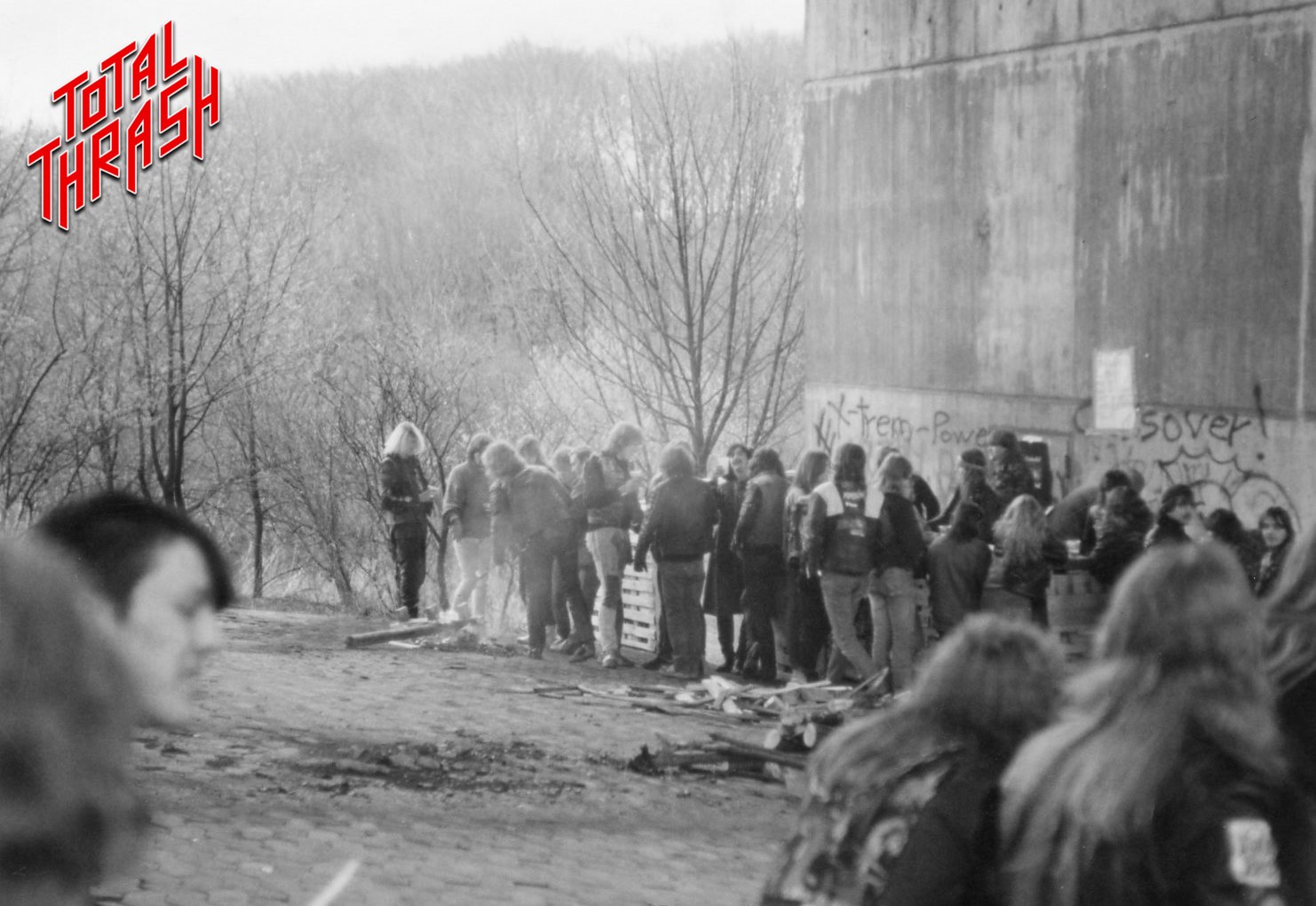 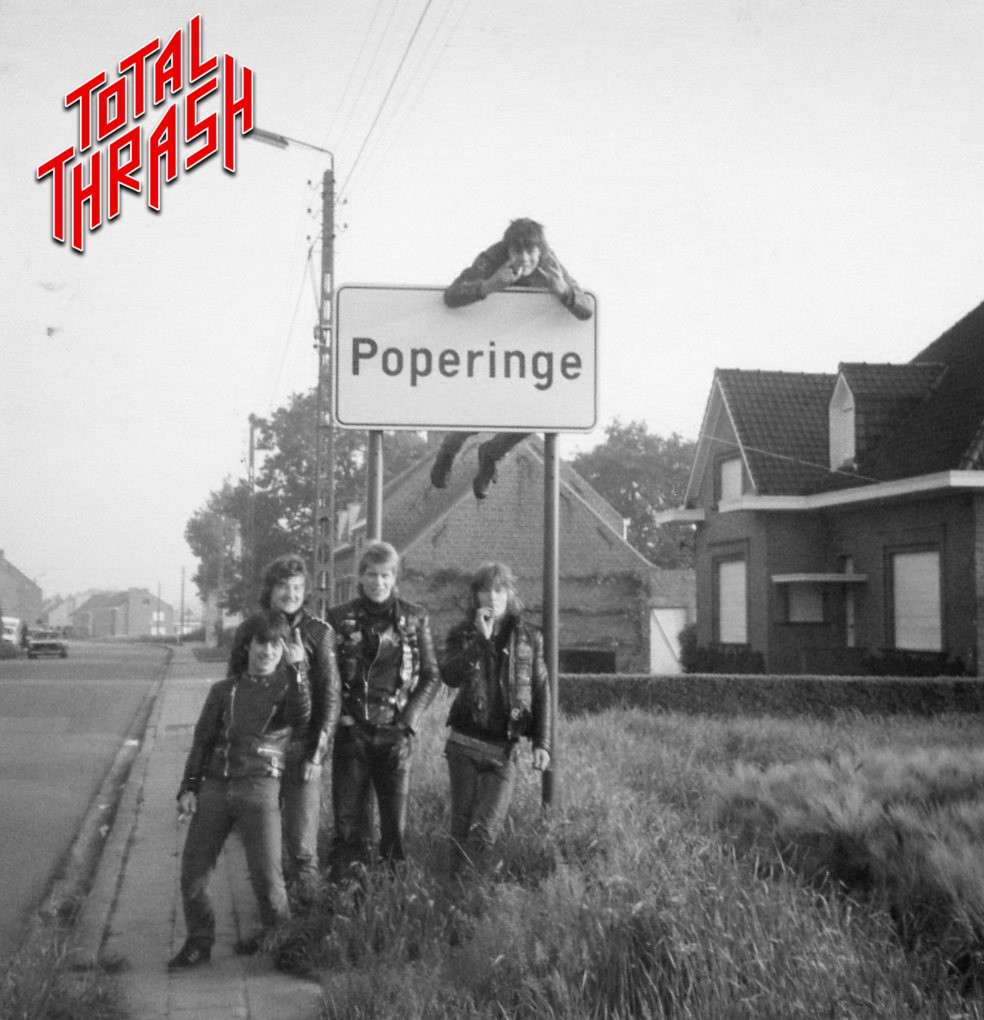 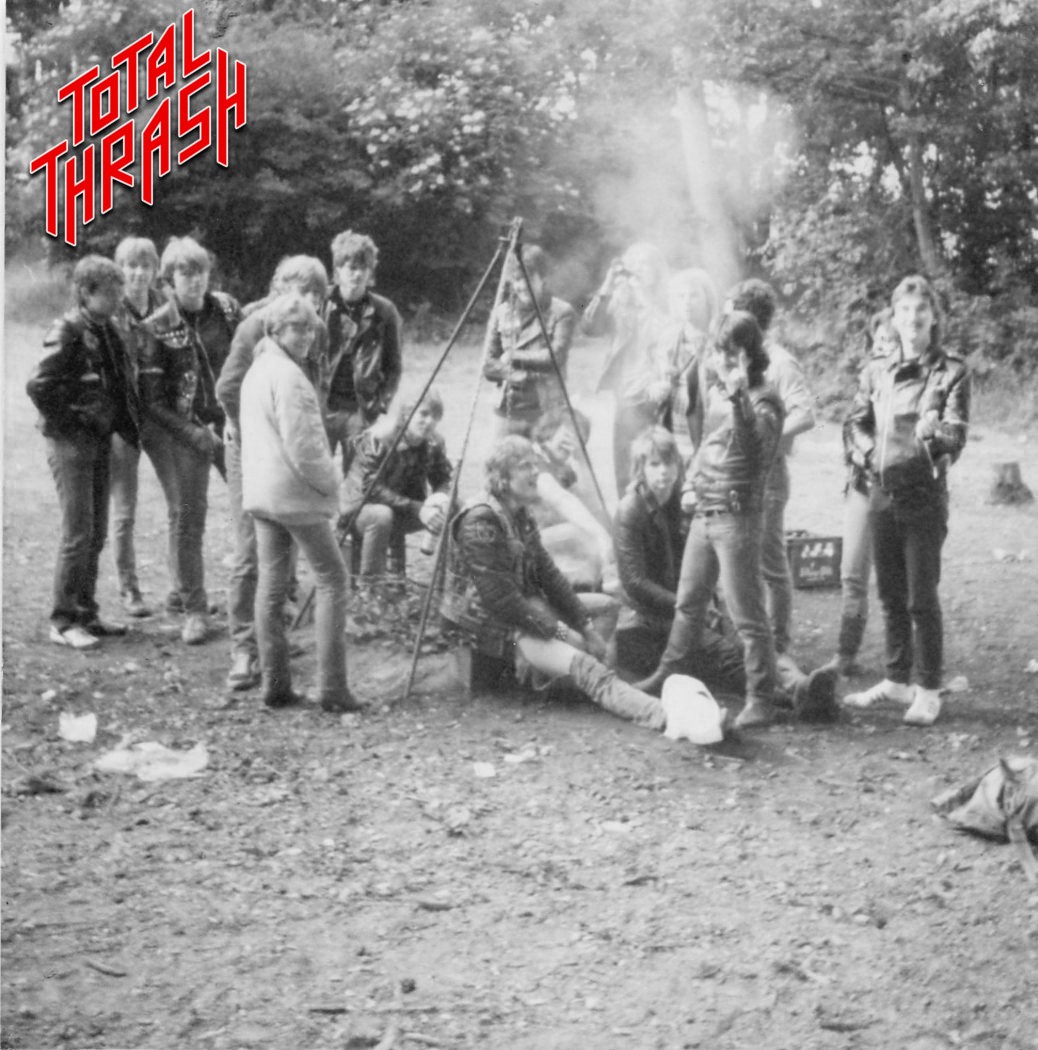 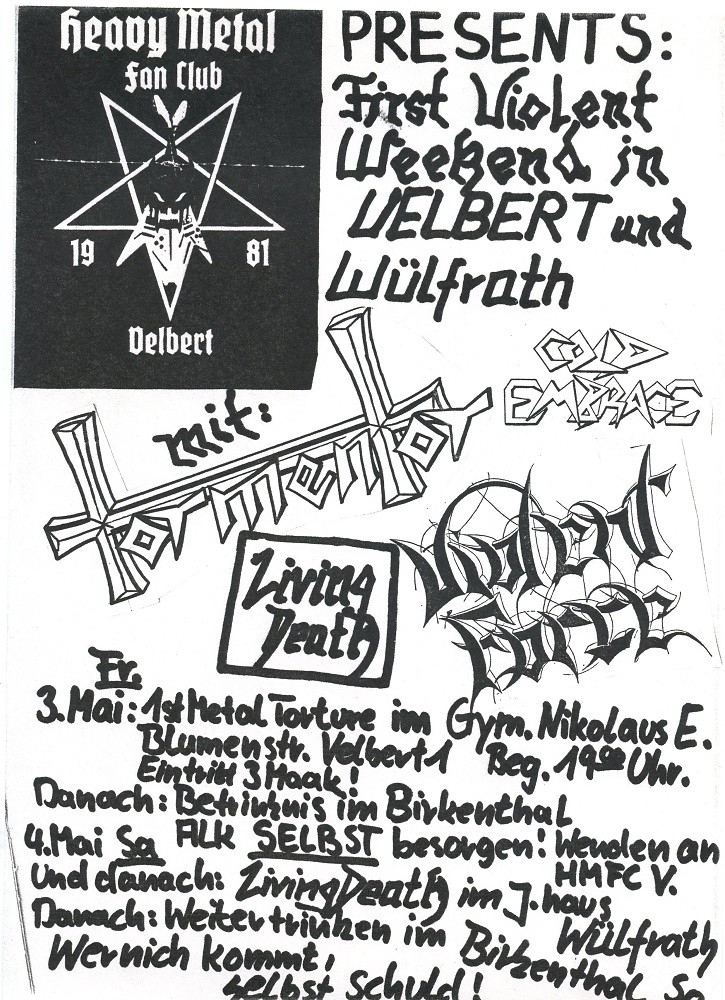 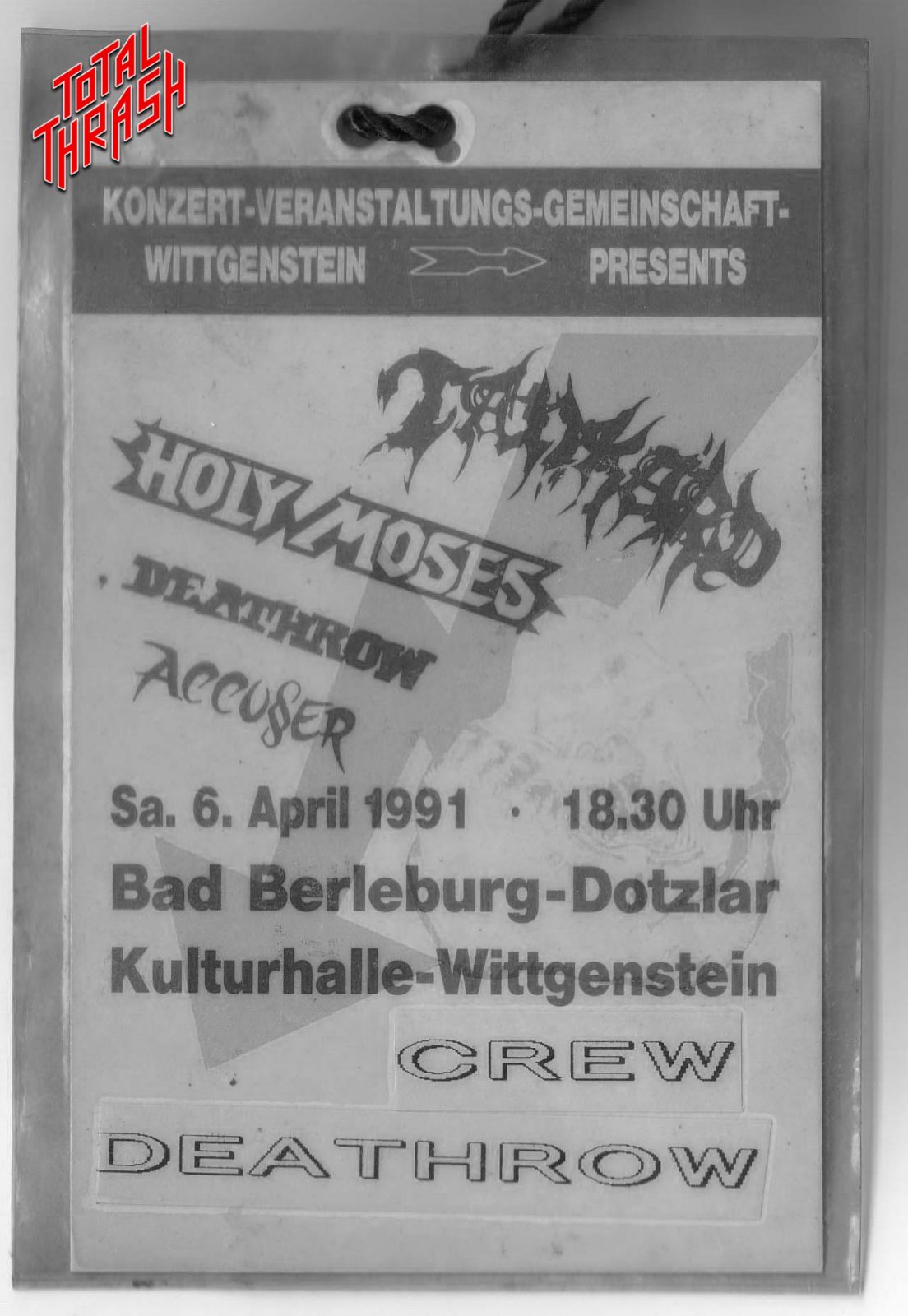 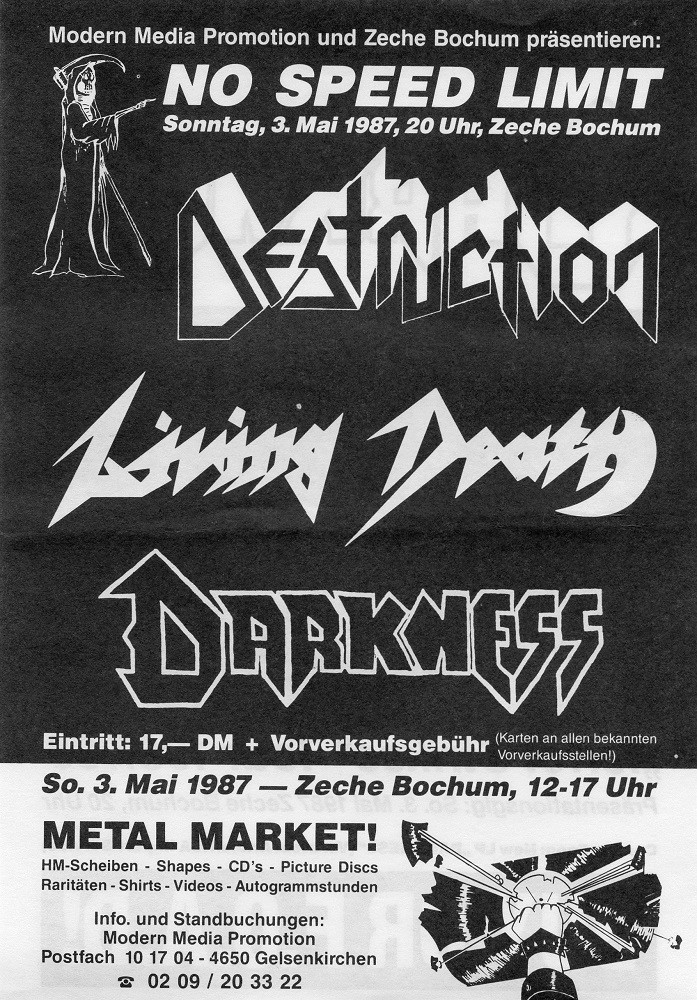 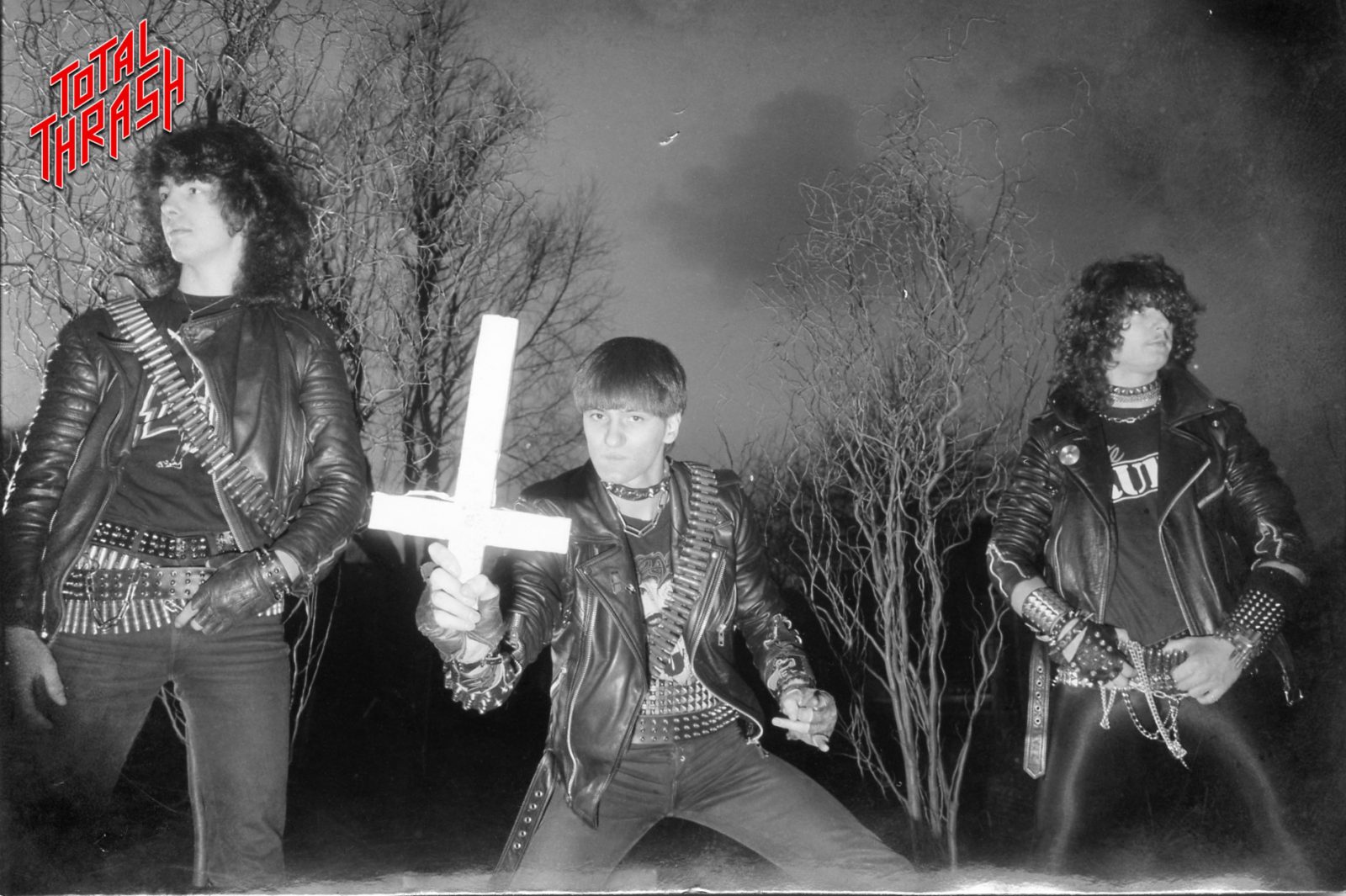 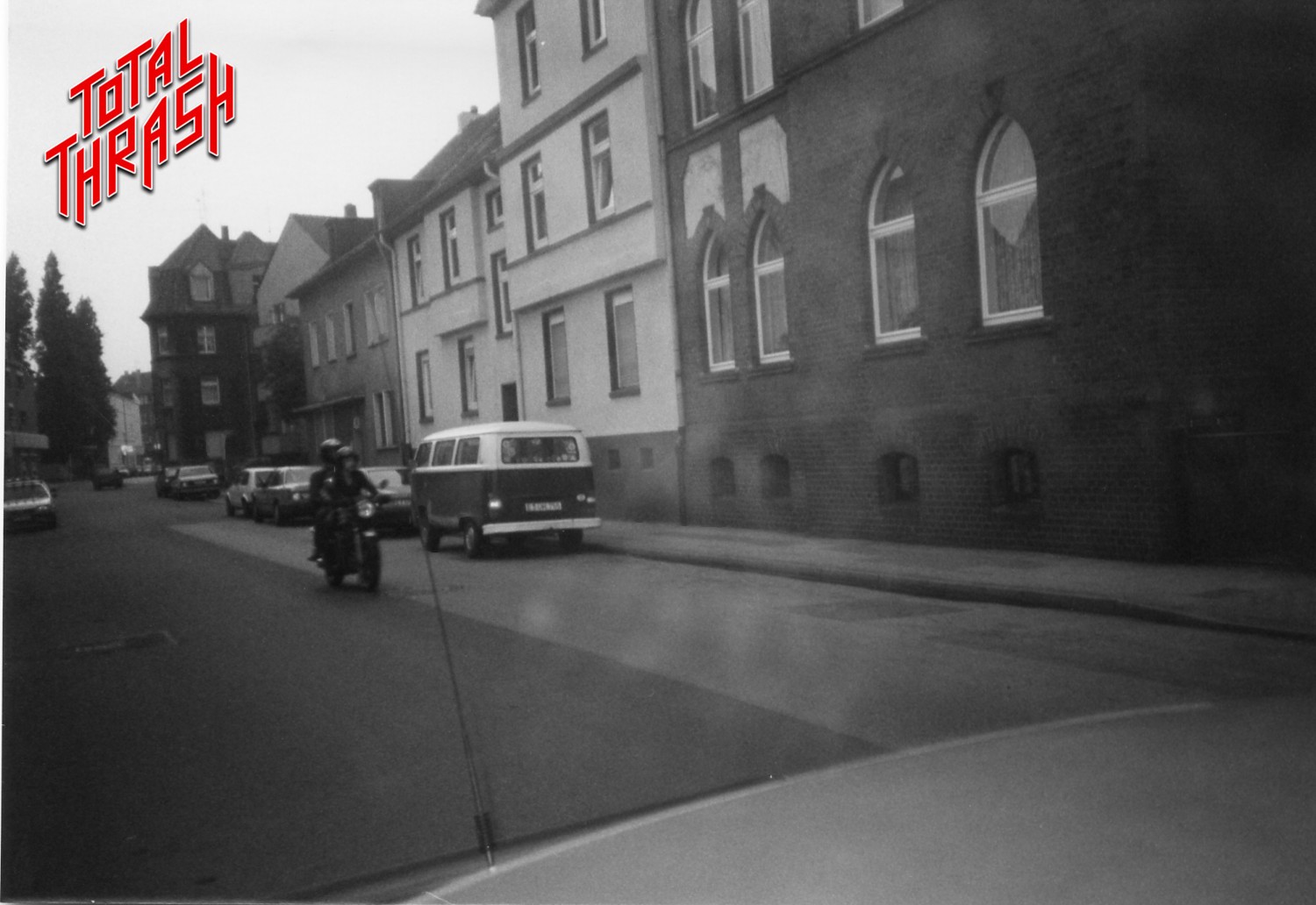 “Ventor” is also a tattoo artist and has his own studio in Essen. He is one of the most famous drummers in the scene and gives an insight into the founding of the band Kreator and his very personal Thrash […]

Martin lives in Gelsenkirchen and is the organizer of the Thrash-Speed-Burn series, looks after bands through the merchandise service and is also firmly anchored in the scene.

Harris Johns is still one of the most important producers inside the country for many of the German Thrash Metal bands. Legendary milestones like Pleasure to Kill, Agent Orange, Raging Steel, Possessed by Fire and The Morning After were created […]

The thrash metal veterans of Fatal Embrace from Berlin have been making old-school thrash metal that hits in the face since the beginning of the 90s. Singer Dirk experienced the scene in Berlin like no one else.

In the 80s Frank Blackfire was first part of Sodom. Later, he played with Kreator. His guitar play had an influence on the records Agent Orange and Coma of Souls, among others. Since 2018, he is back at Sodom

Dirk experienced the Thrash Metal scene in the GDR in Chemnitz and today supports his son’s band in terms of management and technology.

Marcus plays in the band Postmortem, which is based on Thrash / Death Metal. At the same time he organizes his own festival in Berlin and is the owner of the trendy pub Brutz & Brakel.

Peter was part of the Wolfsburg band Protector and played parallel and afterwards in Death Attack and Inzest. In the movie he tells us about his experiences with the scene.

The Wolfsburg-based band Protector was founded in the mid-80s and played many concerts with Kreator, Sodom, Destruction and Co. Their sound was always very rough and sometimes turned into death / black metal.

Ölaf grew up in the north of the country and has seen the GDR scene, including the record mafia, up close. After the reunion he ended up in Hamburg and is still a big Thrash Metal fan today.

Marcel is a thoroughly thrash metal fan and is also close friends with the Reichenbach metal club. He tells us about his experiences over the years.

MacBeth from Erfurt is still one of the most influential Thrash Metal bands from the former GDR. Singer Olli also played for the boys from Moshquito for a while and then came back to MacBeth.

MacBeth from Erfurt is still one of the most influential Thrash Metal bands from the former GDR. Ralf tells us the emotional story before and after the fall of the Wall.

Wolfgang comes from Austria and is an avid Thrash Metal fan and has attended more than 1000 concerts. His favorite bands include Sodom and Kreator.

Alexandra brought many international Thrash Metal acts to Germany by promotions in the 80s and 90s, accompanied the start of Roadrunner and has now her own PR agency in Munich.

The SPV promotion manager is also a Thrash Metal fan and has seen and partially accompanied developments in the past. Today he leads, among other things, the promotion of Iron Maiden in Germany and gives us an insight into the […]

Guido von den Donots has been an enthusiastic Thrash Metal fan since the 80s, just like Chaco from the band Keitzer. In the movie, both report on the scene in Münster and on their experiences as a band and fans.

Roland is an enthusiastic metal fan and has been following the thrash metal scene in the Ruhr area since the 80s. In the film he informs us about his connection to Holland and the Ruhr area.

Holger brought the Rock Hard Magazine to life in the early 80s and in Total Thrash he gives us access to the Dortmund Thrash Metal scene and the Rock Hard Festival, which has been taking place since 2003.

“Lemmy” is a huge thrash and death metal fan and has a gigantic collection. In the movie he informs us about fan culture, his connection to Sodom and gives an insight into his life.

The metal club in Reichenbach Vogtland exists since 1982. “Mafia” is the oldest still active club member and explains us in the movie how the club came into being and the stories before the reunion.

Abo experienced and followed the Thrash Metal scene in East Germany and wrote numerous columns about it. In the movie, he explains the development up to the present day with a focus on the Leipzig and Annaberg-Buchholz area.

Flocke is also one of the guys from the Velbert Metal Club and has accompanied Kreator and Sodom behind the scenes. Today he is in charge of the Rock Hard Festival.

Many organizers and bands know Maddin Schachtvier. Inside his Metal Mausoleum in Oberhausen we talked to him about his numerous Thrash Metal collectibles, the former Heidedorf and about covers and drawings that he has already created for fans, bands and […]

Tamara Frankenberger and Willi Overbeck were among the initiators of what was then the “Zeche Carl” in Essen.

René is the owener of a large backline company based in Hanover and he has accompanied the guys from Kreator for a while. He explains the work of a backline company regarding the collaboration with bands and festivals in Germany.

Wolf is the band leader of the Nuremberg thrash metal troupegroup Mechanix and has seen the scene in and around Nuremberg since the 80s. In addition he is a fan and concert visitor and presents his review in the film.

The manager of the Frankfurter guys from Tankard has been an integral part of the band since the beginning of the 80s and has followed developments over decades.

The owner of Idiots Records in Dortmund was the contact point for numerous fans to get new records in the 80s. Even today, the shop is still very popular and an important part of the scene.

The Dortmund artist has also drawn some covers for Thrash Metal bands (including bands like Despair, Liar and Sodom) and talks about these processes during the movie.

Book author and metal hammer writer Till has written several columns and is also an enthusiastic Thrash Metal fan since the very beginning. He knows the scene in and around Braunschweig.

Stefan started Art Worx Merchandising in Dortmund and is now in charge of one of the largest shirt and merch productions for the heavy metal world in Germany.

Anja has already accompanied the Thrash Metal scene around Essen as a teenager, then she was at Century Media and now works in sales at Art Worx.

The band Assassin has its roots in Düsseldorf in the 80s, but has been playing classic Thrash Metal with NEO Thrash / Crossover and Hardcore approaches since it was founded in 2002.

The owner of Green Hell Records has been running a record shop in Münster for many years. We meet Frank at the warehouse for the film and shoot an excerpt there with him and his collection.

In the 90s, after the joint founding of Century Media in the late 80s, producer Waldemar started the Grip Inc. projects with Dave Lombardo. and Voodoocult started and experienced the experimental influences on Thrash Metal.

“Bernemann” was born in Dortmund and has seen the Thrash Metal scene there from childhood. He was part of Sodom for a long time and has his own band Bonded since 2019.

As the front woman of the band Holy Moses, Sabina slipped into the band one day and has been an integral part of it since then. Her extraordinary singing shaped the band and made them pioneers of German Thrash Metal […]